I don’t normally read fantasy. Uprooted was my first attempt in decades to read a book of this genre. It didn’t go very well.

The action takes place in a country called Polnya. Polnya is often at war with a country called Rosja (a Polish word for “Russia”). The prince from Polnya is called Marek (a Polish name), the prince from Rosja is called Vasily (a Russian name). In fact, at some point I thought that the Wood, being the big evil which “corrupts” and tortures people, is an allegory for communism.

There’s a powerful wizard called Dragon who takes a girl from the village every ten years and keeps her in his tower for the period of ten years. Whatever he does to them, the girls don’t want to stay in the village after he lets them go. They move to cities to start new lives.

The main character is Agnieszka who seems to be very simple and talentless until, to Agnieszka’s own surprise, we discover unexpected things about her and start following her adventures.

Good things about the book

As cliché as Agnieszka might be (an ordinary girl who turns out to be not that ordinary), I like her personality. She can be funny, and I like how brave and independent she is. I also like how she grows throughout the story.

I didn’t find the story very beautiful or special, but I’m grateful that it developed and had a logical end.

I was completely mesmerised by the images! Gusts of sparkly dust flying up in the air when people make love, soap bubbles carrying voice messages inside, bloodthirsty trees, monstrous cows… How do authors ever come up with such ideas?! Do they practice this skill? This is amazing!

Had the book consisted only of these images, I would have probably loved it. Unfortunately, there were other things too, so…

I got so engrossed by the story when the first disaster had happened! The situation was dire, inescapable! How would the author ever find the way out for her character in a crisis like this? It’s simply impossible! I was so curious, so naive…

Fine, I thought. It’s fantasy after all, some magic is bound to happen. As the story progressed, though, I started skipping chunks of the text when problems happened, because I knew how the actions would unfold. My Twitter keeps the memories of my frustration. 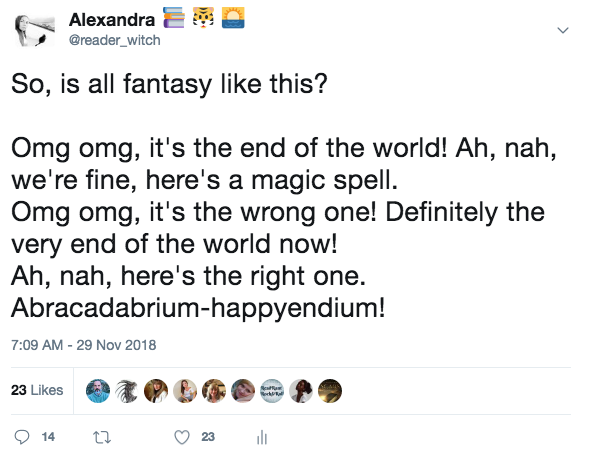 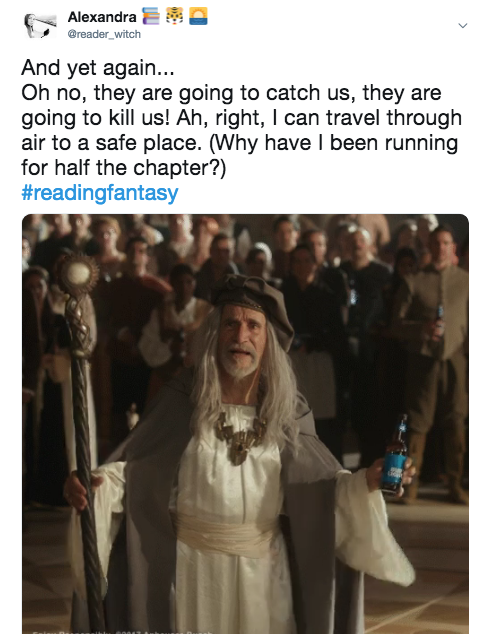 Is it really necessary to devote so much attention to which exactly non-existent words a character uses to solve a problem? Is a reader supposed to care what the character will choose between “abracadabrium” and “bubblegumium”? I honestly don’t know. I didn’t care at all. The words sound silly and the outcome is obvious, anyway.

The character of Dragon

Dragon is always grumpy for the sake of being grumpy. He’s a caricature on grumpiness that makes Shrek or Grinch look deep and sophisticated.

I’m not sure if Novik did it on purpose (and why if so), or just failed to convey the tension and dynamism of many dramatic moments. The scenes that are supposed to shock and startle sound monotonous and almost serene. Judge for yourself. (It is a whole paragraph so it can be considered a spoiler although nothing important to the plot is revealed there.)

Somewhere behind me, one of the men sighed deeply — a relieved noise, as though he were setting down a heavy weight. It was loud in the Wood’s silence. I looked around. His scarf had sagged down from his face: it was the friendly young soldier with the broken nose who’d led my horse to water. He reached out with a knife drawn, sharp and bright silver, and he caught the head of the man riding in front of him and cut his throat in a one deep red gash from side to side.

The other soldier died without a sound.

Is it just me or it sounds as captivating as a list of inventory?

Brave women saving orphaned children and drama queen thoughts after having sex. One word: no.

If all fantasy is like that, I don’t want to read it. I outgrew fairytales a long time ago (just for the record, the book is not appropriate for kids because of violence and sex scenes). Theoretically, this is not a bad fantasy book. It got several awards. There are many praising reviews on Goodreads (while I relate more to this negative one). Many bloggers whose opinions I trust also liked this book. There even will be a movie adaptation, produced by Ellen DeGeneres!

Thus, I’m inclined to think that I’m just not compatible with fantasy. Some people from Twitter offered to help me choose a fantasy book that I might enjoy more. That’s why I will give this genre another chance, but not before the spell from this one wears off. 😉